Eliza Carthy and the Wayward Band

For the best part of the last fortnight, the Howard Assembly Room has played host to the Yorkshire Festival and its Songlines Series.  Already four rather exceptional, musically and geographically diverse artists have graced the boards of this beautiful performance space within the Grand Theatre, Leeds: there has been the thrilling sound of Mbongwana Star from the Democratic Republic of Congo; the critically acclaimed Malian singer and guitarist Rokia Traoré; Germany’s revered pianist and composer Hauschka; and the American folk duo A Hawk and a Hacksaw.  Now bringing this superb programme of events to a wonderful close tonight is that celebrated daughter of Yorkshire (and English folk legends Martin Carthy and Norma Waterson), Eliza Carthy and the Wayward Band.

Some three years ago, Eliza Carthy put together an all-star band of 11 stellar musicians drawn from some of the more illustrious acts of the modern British folk era including members past and present of Bellowhead, Mawkin, Blowzabella, Edward II, Emily Portman Trio, Peatbog Fairies, Dreams of Tall Buildings & Tyde.  Tonight these dozen individuals (including three relatively last-minute deputies on guitar, violin and trumpet) join collective and significant forces to bring us 90 minutes of extreme aural pleasure.

Eliza Carthy and the Wayward Band will release their debut album Big Machine at the end of October and tonight is the first public airing for many of the songs from it.  Eliza Carthy tells us that it will be like our very own private screening of the record and given the intimacy and warmth of the music and its surroundings there is so much truth in her assertion. 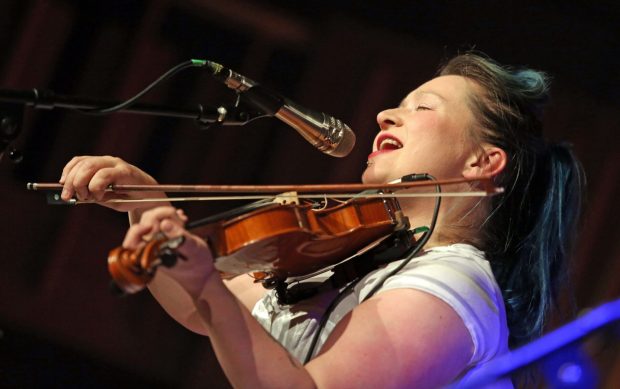 The band opens with ‘Devil in the Woman’. A perfect example of a Broadside ballad, it is the first of two songs Eliza Carthy and the Wayward Band perform about domestic abuse (the other being the penultimate ‘Fade and Fall (Love Not)’, inspired by Caroline Norton, a Victorian-era woman whose brave efforts did much to change the law relating to the custody of children if a marriage were to break down).  In these two songs alone, it is clear that Carthy does not shy away from the more difficult lyrical subjects, a fact reaffirmed by last year’s powerful single ‘You Know Me’.  A song about the refugee crisis, it gathers even greater emotional pace and resonance following last week’s referendum decision of the UK people to leave the European Union.  It speaks powerfully of cosmopolitanism and togetherness and embodies the true spirits of both unity and hope.

In maintaining the grand traditions of folk music, there are bloodthirsty tales of murder, the gallows and divine retribution.  As Carthy jokingly points out “we did not come here to have a nice time.”  Yet amongst all of this death, dishonour and heartache we also get moments of startling tender beauty.  Ewan MacColl’s ‘Fitter’s Song’ is breath-taking.  A song which originally formed part of MacColl and Peggy Seeger’s 1958 project Song of a Road – about the building of Britain’s first motorway, the M1 – here Carthy dedicates it to all the women engineers of the world.

Another moment of exquisite charm comes in the delicate form of her interpretation of Rory MacLeod‘s ‘Hug You Like A Mountain’.  Stripped here of its studio duet with Teddy Thompson (another child of famous British folk music parents), the song loses none of its spiritual intimacy as it just takes wings and flies.

Pushed along by her exceptional band – marshalled here by Carthy’s long-standing musical lieutenant and crack melodeon player Saul Rose – Eliza Carthy reaches dizzying new heights.  Long regarded as having been in the vanguard of those responsible for the recent folk revival, with the Wayward Band – replete with their rattling rhythms, soaring brass and sweeping strings – she is elevated to an even higher, far more versatile musical plane and in so doing signs off this year’s Yorkshire Festival with the loudest and most exultant of hurrahs.

More photos from this show can be found HERE

The post Eliza Carthy and the Wayward Band – Howard Assembly Room, Leeds, 02/07/16 appeared first on God Is In The TV.

Source: God is in the TV Eliza Carthy and the Wayward Band – Howard Assembly Room, Leeds, 02/07/16

EMBRACE – THE GOOD WILL OUT 21ST ANNIVERSARY TOUR MARCH 2019

Back to The City with Simon Calder